Guwahati, in a way, can be called the city of temples. While the locals know about them, visitors are usually told of one or two of them while the rest of them remain hidden. Do note that here we are talking about historical temples with archaeological significance. I am deliberately avoiding newly built temples and shrines that do not interest me. 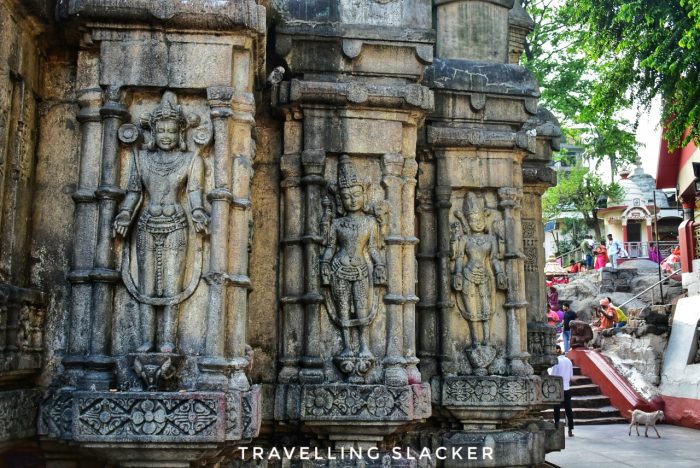 The Kamakhya Temple is the most famous temple in Assam that hardly needs any introduction. It is located atop the Nilachal hills overlooking the sprawling city of Guwahati, Assam. Dedicated to the mother goddess Kamakhya, it is known to be a center of Tantric practices. It is also the site of the Ambubachi Mela, an annual festival that celebrates the menstruation of the goddess.

Do note that apart from the main temple, there are many other important smaller temples scattered around that hill. So, you should keep a day for it to explore the whole area and also visit other temples such as Tara Temple, Bhuvaneswari Temple, Bagala Temple etc.

As a tourist, you can go anytime and explore the place without standing in a queue. However, if you are a serious devotee, be prepared for long queues 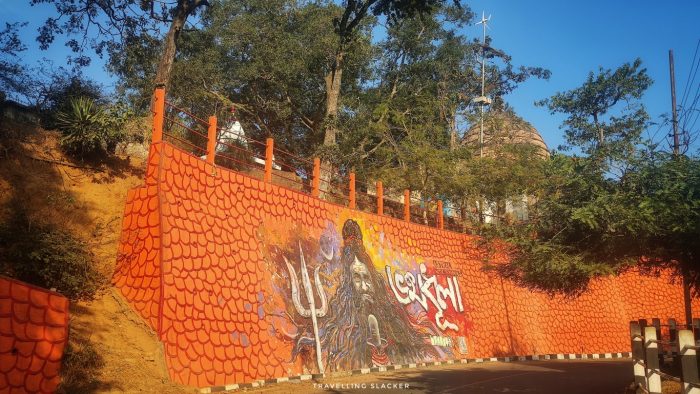 The Navagraha Temple is located on the top of Chitrasal Hill (or Navagraha Hill), near Uzan Bazar. As the name suggests, this temple is important for those who believe in astrology as it is dedicated to nine celestial bodies. Devotees come here to worship to sort out their astrological woes. It was built by Ahom ruler Rajeswar Singha in the late 18th century although it’s been renovated after an earthquake later. A tank was excavated not far from the hillock to provide water to the devotees. It is now known as Silpukuri, located by the side of a busy road 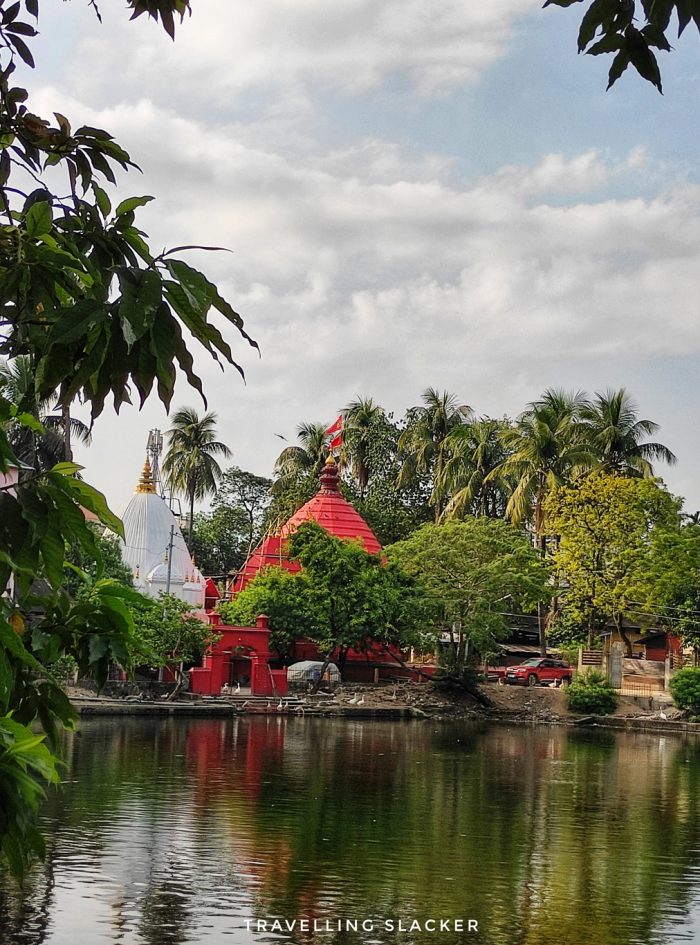 Ugratara Devalaya is a unique temple dedicated to Ugratara located in the western side of Jor Pukhuri tank in the Lotaxil (Latasil) locality. It is a Shakti Temple and the present structure was built by Ahom King Siva Singha in 1725 AD. However, there is also a Buddhist connection here. The ancient text of Kalika Purana describes a Shakti peetha called Dikkara vasini who has two forms, Tikshna kantha and Lalitha kantha. The former is dark and pot bellied, also called Ugra Tara or Eka jata. While the latter is graceful and attractive, also called Tamreshwari. 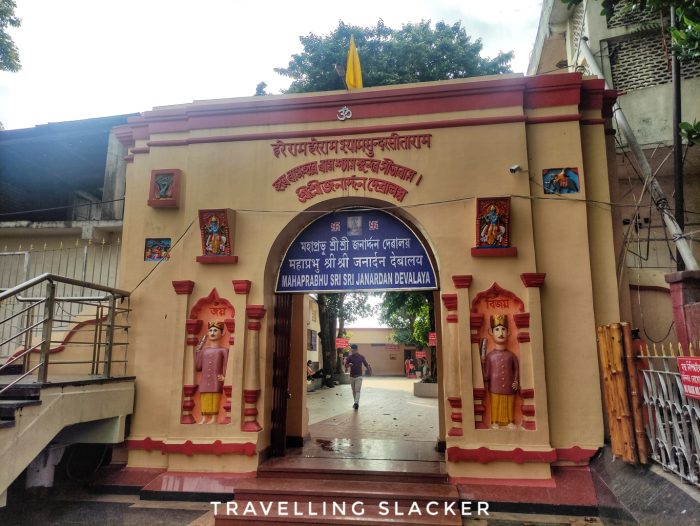 The Sukreswar Temple is a Shiva temple located on the Sukreswar or Itakhuli hill on the south bank of river Brahmaputra in the Panbazar locality of Guwahati city. Leading down from the temple compound is a long flight of stairs to the Ghat Varanasi on the Bhahmaputra. It was constructed in 1744 by Ahom King Pramatta Singha. Locals also use it for conducting various rituals. 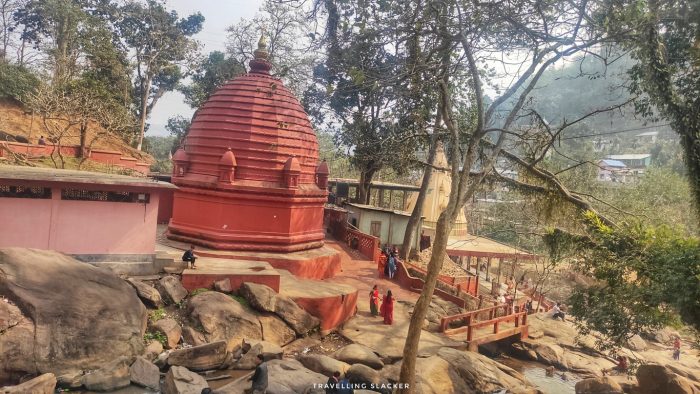 Basistha Ashram is located in the south-east corner of Guwahati, on the edge of the Garbhanga Reserve Forest. It is believed that the great Vedic sage Basistha (Vasishtha) set up a Ashram here. It is a picturesque location on the edge of the forested hills where several hilly streams meet. While the present structures are more recent, a lot of ancient treasures have been excavated from here dating back to the 10th-11th century. 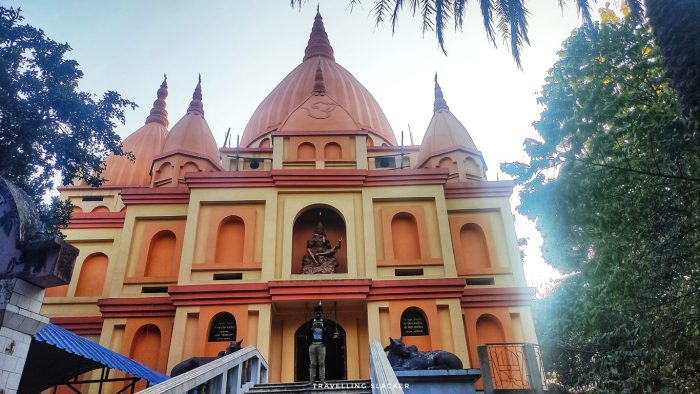 Lankeshwar Temple is an ancient Shiva temple on top of a hill in the western part of the Guwahati city near the Gauhati University in Jalukbari. The hill actually has multiple temples including a SHiva temple and a Shani temple, along with a larger than life Hanuman STatue. However, most of the structures are new and even if it was an ancient site, not much remains from that era. Nevertheless, it is a nice hike to the hilltop and a good exercise on a cold, rainy day (will not be very pleasant on a hot and humid day). 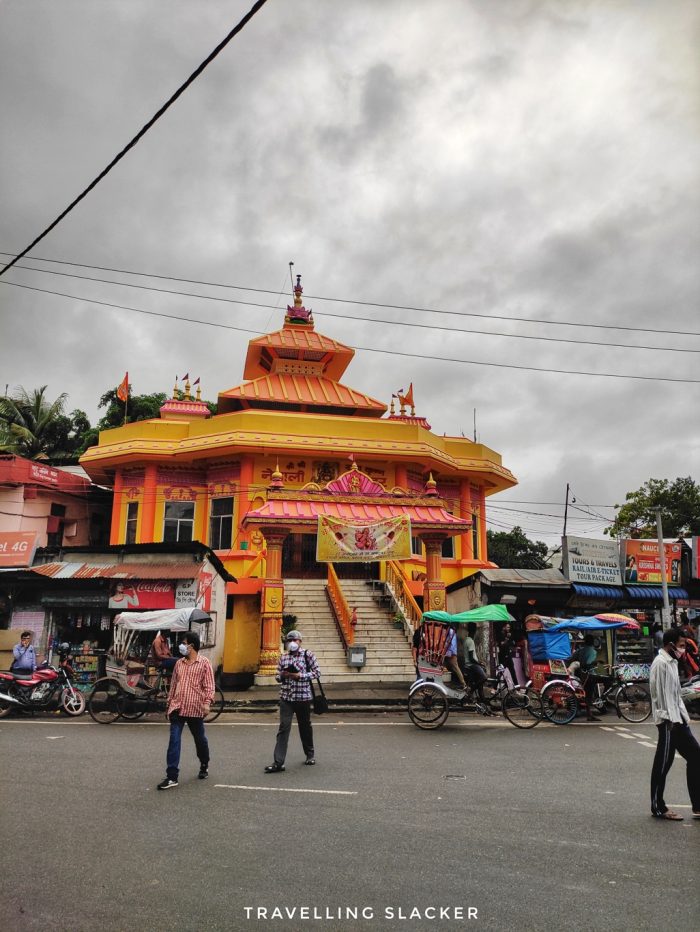 Island Temples on the Brahmaputra 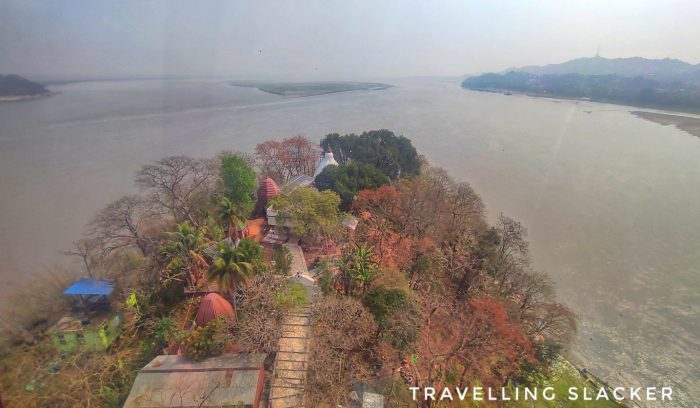 Umananda Devaloi is a Shiva temple located at the river island of the same name on the river Brahmaputra just opposite the office of the DC office of Kamrup Metro or the Kachari Ghat in Guwahati. Apart from the temple, it iis known as the smallest inhabited riverine island in the world. This small hillock on thebisland is known as Bhasmacala. The present structure was built in 1694CE in the order of Ahom King Gadadhar Singha but was destroyed during the earthquake and renovated. Nevertheless, the actual has been a revered destination for a much longer period.  It’s a popular destination in Guwahati that you can visit by hopping on to a ferry from Uzan Bazar. 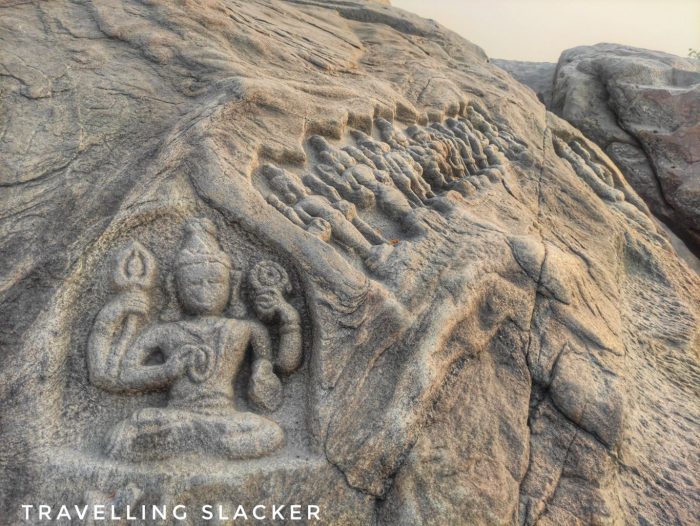 Urvashi is a seasonal and enigmatic attraction near Umananda. It’s an enigmatic island with remains of a thousand-year-old temple. It gets submerged during the rains but in the winter when the water recedes, one can walk through the sandy river bank to reach it. While the temple no longer exists, you can till find a lot of sculptures engraved on the rock. 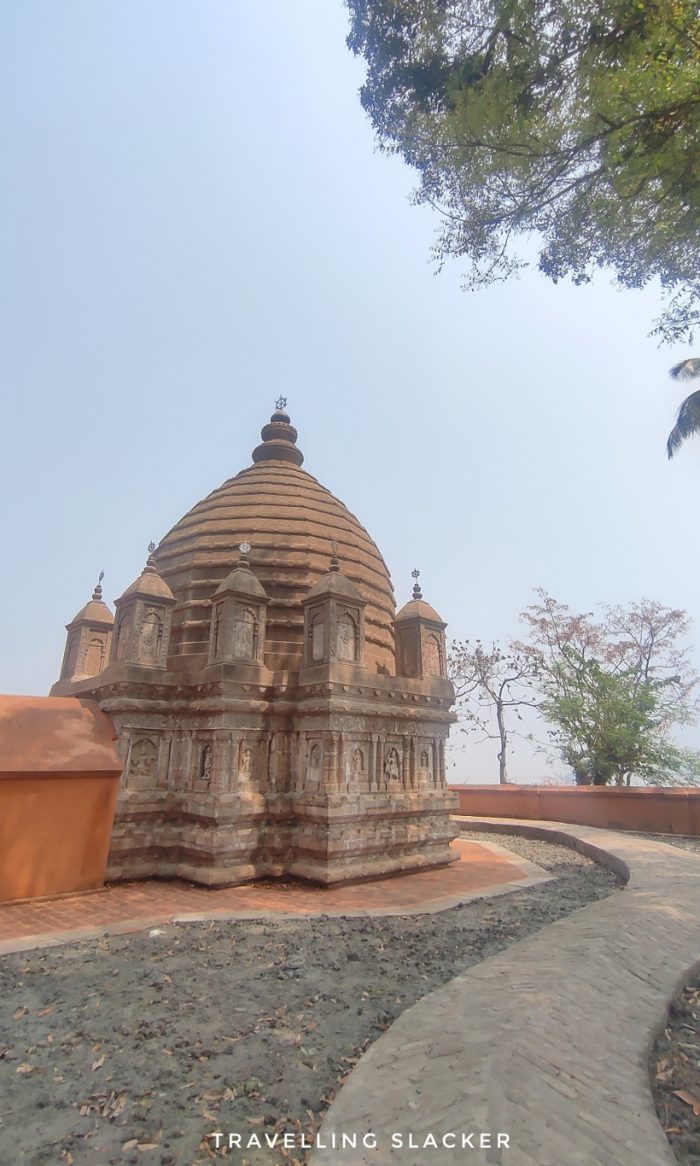 Aswaklanta Temple was built by Ahom King Shiva Singha in 1720 on the northern bank of the mighty Brahmaputra. There are actually two temples, one situated in the foothill and the main one atop the hill, respectively known as Kurmajanardan and Anantasayi. Ashwaklanta literally means the place where the horse got tired. There are many origin stories. According to one, this is where Krishna’s horse got tired when he was looking to fight Narakasur. However, another legend connects the horse story to the Pandavas. There are lots of exquisite sculptures including dasavataras on the wall of the temple. 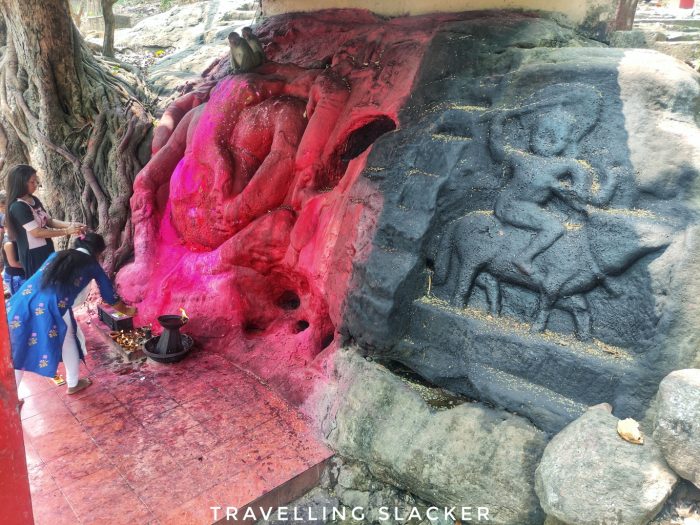 Dirgheswari Devalaya is a temple situated in atop a hill, around 5 KMs from North Guwahati. Many ancient images made on rocks can be seen scattered around the place. The current brick temple was Built by Ahom king Siva Singha. It is considered a Shakti Peeth here. It is a live temple and devotees can always be seen flocking here. It’s another strategic location, a hillock overlooking the Brahmaputra. It is said that Lachit observed the movement of fleet from a rock near this place.

Doul Govinda is a popular Krishna temple located in North Guwahati. It is near the Ropeway terminal and easy to reach. It is a comparatively new temple built around a hundred years ago. It is also better known and well funded by devotees.

It is built near the confluence of the Barnadi and Brahmaputra rivers. As per Yogini Tantra there was a pond called Manikarnika outside the temple that no longer exists. A rock inscription informs here that the present temple was built by Ahom King Rajeswara Singha in the mid-18th century.

The Rudreswar Temple or Devaloya is a Shiva temple built in 1749 CE by Ahom king Pramatta Singha, in memory of his father Rudra Singha.

Located near Ashwaklanta, this is actually a branch of the original Auniati Satra in Majuli.

There are several important historical temples in the 50-100 KM radius around Guwahati. These include the likes of Madan Kamdev Temples near Guwahati, Hayagriva Madhab temple in Hajo, and Sri Surya Hills in Goalpara. If you have additional days, you can drive to these ones too.