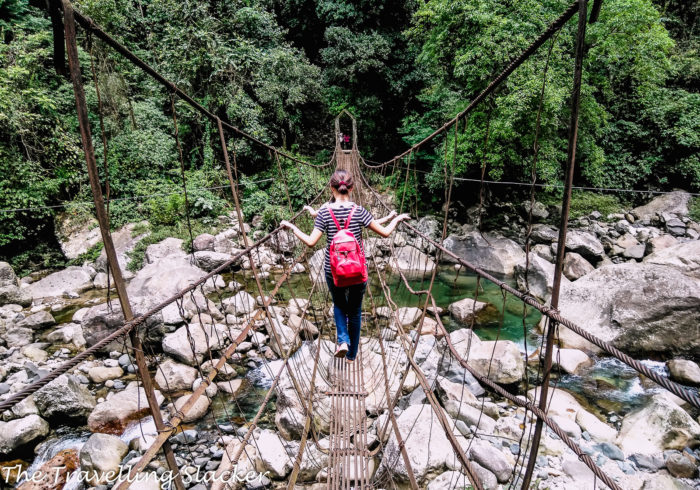 Trekking should have been the top activity in many parts of Northeast India, considering that most of the states are hilly ones. However, due to remoteness and political instability for most parts of the 20th century, they never developed a serious trekking infrastructure like the Himalayan states of Northern India, or for that matter, neighboring Nepal. I am sure there are still dozens of trails here that remain to be discovered but there are a few that have managed to become famous over the last few years. I think they will slowly grow over the years.

A Guide to Trekking in Northeast India

Firstly you need to understand the geography of NE. There are 8 (7+1) states here. Six of them are predominantly hilly, while two are predominantly plains with some hilly areas. The areas bordering Tibet are parts where you can get a genuine Himalayan experience. At the same time, the lower hills offer a completely unique experience including landscapes, people, culture, flora, and fauna, that you are unlikely to find anywhere else in India.

Basically, Sikkim is a fully Himalayan state while the upper areas of Arunachal will also offer you a similar landscape. The lower hills of Arunachal are different. They are covered in dense rainforests and offer a different experience. The same can be said about other states that have much lower hills, generally ranging between 1500-2000 meters in altitude.

Arunachal is one of the major trekking destinations in the Northeast. It borders Tibet and shares a lot, culturally and historically. Even the current Dalai Lama escaped Lhasa and arrived in India through this Tawang route in India. The early colonial explorers also explored these routes, especially the ones around Tawang. Also, there are some other trekking routes in the interior Arunachal, such as the Namdapha Rainforest and Talley Valley near Ziro. Each of these routes provides distinct experiences beyond your wildest imagination.

Sikkim is the other major trekking destination in the Northeast and it is also the most developed and “mainstream”, for the lack of a better word, because it borders Nepal. It boasts of Kanchenjunga, the third the highest peak in the world, a lot of assorted mountains, making it an instant hit among trekkers and mountaineers.

Nagaland offers low hills that are easy to hike around. The most popular trekking destination here is the Dzukou Valley, which can be called the Valley of Flowers of Northeast, and nearby Japfu Peak, both near Kohima.  The highest point here is Mount Saramati (3800 meters) in Kiphire district, which is beginning to draw the attention of late. Many other treks are possible here but most of them remain unexplored and is infrastructure missing too.

Manipur has excellent low hills suitable for trekking but not all those areas are easily accessible or well-developed for commercial trekking. The state that is best developed in terms of tourism is Ukhrul, where you can go for many hikes including the Shirui Hills trek. Other hill states like Tamenglong and Senapati have great options but awareness and infrastructure is lacking.

Similarly, the Lushai Hills of Mizoram is a lower hill with a few small peaks in the 2000 meters range. The most famous trek here is the Blue Mountain Trek (2200 meters). Apart from that, there are some smaller treks around Aizawl such as Durtlang Hills Trek.

The hills of Meghalaya are divided into three parts, named after three major ethnolinguistic communities in the state, Khasi Hills, Jaintia Hils, and Garo Hills. These are mostly very low hills but there are many unique attractions that you can find. For example, hike down to the double-decker root bridge and the rainbow falls offer you experiences and views beyond your wildest imagination.  Most of them are short day treks.

Tripura is basically a plain state bordering Bangladesh. The only hill area here is the ones bordering Mizoram on the other side, especially the Jampui Hills region. Nevertheless, this is a minor hill area where you can go for some small hikes and I would not consider it for serious trekking.

Assam is mostly plains but it has a couple of hill districts, namely Karbi Anglong and Dima Hasao (North Kachar). There are possibilities but as of now, it is hardly considered a serious trekking destination.

The Upper Dibang valley centered around Anini is the best trekking destination in India that no one knows about. Scores of treks are possible here and dozens of high altitude lakes are hidden in the mountains beyond Anini. The best-known trek here is the Seven Lakes Trek. As the name suggests, it covers as many as seven lakes. There are other treks here such as Three Lakes Trek and Athu Popu Trek.

This trek is named after Lt Col FM Bailey, a British explorer who traversed this first.  It starts somewhere near Thembang (near Dirang), crosses some passes to reach Mago in 6-7 Days. From there you can come back to Tawang. This area is dominated by Gorichen Range and there is a trek to Gorichen Bse Camp too. However, civilians rarely go there as it is a frontier area. 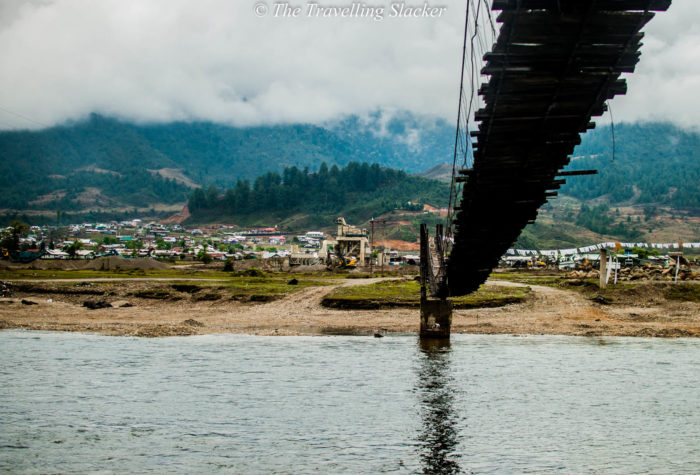 This trek starts from Mechuka, which is a popular tourist destination anyway. You hike for a few days to reach a distant, high-altitude lake. You come back to Mechuka later.

Pemako is a sacred zone for Tibetan Buddhists. The location is somewhere in the northern areas of Arunachal, near the international border. It has to be reached from Tuting and you need at least 20 days in hand to even undertake this.

Namdapha is a dense rainforest in the easternmost part of Arunachal. You can opt for the shorter Namdapha trek, that takes you into the interiors of the jungle for a few days.  However, the longer trek takes you to Bijoynagar, one of the remotest villages in India on the border of Myanmar.

Talley Valley is a beautiful forest area full of exotic flora and fauna, that can be reached from Ziro Valley. It takes around 3 days of trekking and is one of the easier treks with great views as you pass through dense vegetation.

Glow Lake Trek is a low altitude trek in Lohit Valley. It is a 1-2 day trek near Wakro where you hike for a few hours through intense forests of Kamlang Wildlife Sanctuary to reach the lake. Here’s a shot from the lake.

Many short but delightful treks are possible in and around Dirang although they have not yet been properly explored or prommoted. For example it is possible to trek from Dirang Dzong to Sangti Valley too. I did part of this trek and it was delightful in the autumn season. You can check my post on Dirang Trek.

Diba Adi is a lasser known trek in Siang Valley with a maximum elevation of about 2000 meters beyond Parong, Dosing, Pareng, Sitang and Riga villages. You can see a lot of Mithuns (Bosfrontalis) as the villagers maintain herds. Lot of interesting flora and fauna can be discovered here.

Dzukou Valley Trek is the most popular trek in the entire Northeast. It is an easy trek that you can do yourself. It is located near Kohima and there are provisions to stay at the valley. While you can go all around the year, the best time is early summers, when the endemic Dzukou Lilies bloom.

Japfu Peak is also located in the same region as Dzukou Valley but it is a separate route that takes you to the top of the peak through a rhododendron forest. This is the highest point in Kohima district.

Mt. Saramati is the highest peak in Nagaland at 3800 meters. It is located in Kiphire district which is rarely visited by tourists although there is a lot of potentials. You will need to find local guides for this trek. The base of this trek is a beautiful village called Thanamir known for apple orchards. 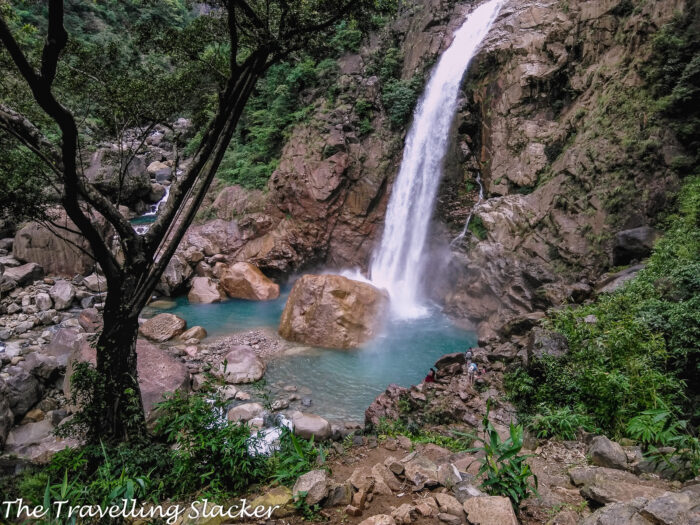 Nongriat is the most popular destination in Meghalaya. This village boasts of the double-decker living root bridge. It is actually a downhill trek to the village from a point near Cherrapunjee (coming back is a harder trek). However, the complete experience includes a hike from there to the rainbow falls, where you can see a perennial rainbow above the waterfall (if it is not too cloudy). That takes another 1.5-2 hrs from the village.

This is named after 19th-century British explorer David Scott, who traversed this path. It is near Shillong, which makes it easily accessible and hence it is one of the oldest trekking routes in the region. It starts near the village of Mawphlang.  The complete trail is much longer and may take several days but people mostly do a shorter version that can be done in a few hours.

Goecha La in West Sikkim is one of the most popular major treks that takes around 9-10 days. It covers areas within the Khangchendzonga National Park, which is a UNESCO World Heritage Site. It starts and ends in Yuksom. You also pass through Dzongri and some people do the shorter Dzongri Trek only up to this point.

SIngalila National Park is spread around the area that connects Darjeeling, Sikkim, and Nepal. This long trek starts from Uttarey, a small town in West Sikkim, and takes as many as two weeks. Singalila is also a UNESCO World Heritage Site.

It is one of the most popular easy treks in Sikkim. It starts from Hilley, near Okhrey, in West Sikkim. You enter the Varsey Rhododendron Sanctuary during this trek. As the name suggests, it is full of rhododendrons but you need to be in spring (March-April) to catch them blooming.

The Green Lake is a trek in North Sikkim, under the shadow of Mount Kanchenjunga on the Zemu Glacier. It starts and ends in Lachen and takes around 2 weeks to complete as you reach an altitude in excess of 5000 meters.

The highest peak in Mizoram, the Blue Mountain (Phawngpui) is 2157 meters and is situated at the south-eastern border overlooking the Chhimtuipui River and the hills of Myanmar. Sangau village, the closest settlement from the peak, is 229 kms from Aizawl. Rhododendrons and orchids dominate the forests.