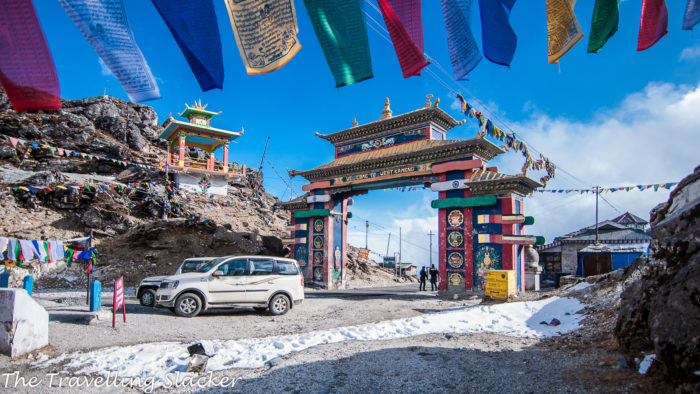 Tawang does not really need much of an introduction. It is one of the places in Arunachal that was always on the tourist map, while people had no clue about other parts of the state. Naturally, it is also the most developed area in terms of tourism. The nature of the terrain is such that you don’t just visit one place. When you plan for Tawang, you normally have a few days at hand and also make stops at either Bomdila or Dirang. However, there are dozens of underappreciated spots on the entire route and if you want, you can easily extend your trip for a couple of weeks.

What you need to understand about Tawang circuit is that it is not only about Tawang the town, or for that matter Bomdila and Dirang. These are all important stops but there is much more to the region spread across two districts of Arunachal Pradesh, mainly West Kameng and Tawang. Apart from the expected hilly charm, Monpa culture, and Buddhist monasteries, there are sender valleys, bird watching opportunities, orchid heavens, treks, and a few things beyond your wildest imaginations. This is also the most developed area in terms of tourism infrastructure in Arunachal. There are great facilities and friendly people and the dreaded roads has also improved of late, thanks to BRO.

Things to do in and around Tawang

Tawang, bordering Tibet on the north-western corner of Arunachal Pradesh, is a major center of Tibetan Buddhism and it has played an important role in their history. The fact that the Sixth Dalai Lama was born in Tawang in the 17th century, tells us of the importance of the town in the Tibetan world. It is dominated by Monpa people.

The 400-year-old Tawang Monastery atop the hill dominates the landscape of Tawang and it is the largest monastery in India and second-largest in the world after the one in Lhasa, which itself makes it worth a visit. You can go beyond Tawang to visit attractions such as Bum La, an old trading route connecting to Tibet, Sangetsar, a beautiful high altitude lake that is also known as Madhuri Lake after the Bollywood actress who once shot a film here.

There are many other smaller monasteries in Tawang too, while the War Memorial, with memorabilia from 1962 Indo-China War, is worth a visit too.  You can do other interesting things here such as visiting local handicrafts center or visiting nomadic pastoralist Brokpa families that tend to Yaks and produce ya cheese while practicing transhumance.

Top Places to Visit on the Tawang-Dirang-Bomdila Circuit

Bhalukpung is a small town on Assam-Arunachal border, divided between both states. It is located on the banks of a beautiful blue river which is called Kameng in Arunachal and Jia Bhoroli in Assam. It is a regular stop for people going towards more famous Tawang and is a picnic spot for locals. However, Bhalukpung itself has enough to lure the visitors, especially for nature lovers and combined with nearby Seijosa, it is considered to be a circuit on its own by Arunachal Tourism. It is also known for adventure activities like river rafting.

Tipi is a few KMs ahead of Bomdila. It is known for its orchidarium. The jungles behind Tipi is the Sessa Orchid Sanctuary. Especially the spring season is the best for orchids. In case you have not realized yet, Arunachal is one of the richest places for orchids with more than 600 recorded varieties.

Bomdila is the headquarter of West Kameng district. It is a nice little Buddhist town with a beautiful monastery. There are many hotels and homestays here and the market is also worth a visit if you want to buy local products.

Mandala is the best-kept secret for bird watchers. Actually, serious birders know about it already, while no one else has even heard of it. It is a secluded spot around 25 KMs from Dirang with a lodge frequented by hardened birders and photographers.

Dirang is a beautiful Monpa town 40 KMs ahead of Bomdila, with a famous monastery with an ethereal setting. There is also a hot water spring here which is very famous and you can take a dip here too if you have time. There is also an ancient gompa nearby and simply walking around the valley can be a delightful experience. Nearby Dirang Dzong is the original village here which was built around a fortress.

Thembang is a traditional village centered around a fortress (Thembang Dzong). It is an ancient village with centuries-old structures and a great place to experience Monpa history and culture.

Shergaon is a small diversion from Bomdila. It is the region dominated by the Buddhist Sherdukpen people. It was lesser-known until recently but it is beginning to grow its tourism of late. You can stay at the local homestay and experience the rustic charm and walk along the fruit orchards experiencing yet another exotic culture. Nearby Morshing is a Monpa village higher up and from there you can drive or hike to Lagayla Gompa, yet another historical monastery with many stories associated with it.

Sangti Valley is a short diversion from Dirang. It is a beautiful secluded valley inhabited by the Monpas that is slowly beginning to get famous. During spring, these meadows get covered with colourful orchids and wildflowers.

Se La, often mistakenly called Sela Pass (because La means Pass), is a 4170 meter high pass that connects West Kameng and Tawang districts. So, it is basically the gateway to Tawang and at such a high altitude, you can expect to find snow during most of the year. There is a lake near the summit, called Sela Lake, which is considered sacred in Tibetan Buddhism.

Jaswant Garh is a few KMs after the Sela top. It is the place where Jaswant Singh Rawat, an Indian army man laid down his life fighting off the Chinese. There is a memorial for him which has been turned into a museum with various war memorabilia.

Jang is a small town after Se La, around 40 KMs before Tawang. A small diversion from here takes you to the iconic Nuranag Waterfall, where you can see a rainbow over the fall in the afternoon, as sunlight falls on the fall.

Bum La is one of the frontier passes that used to be a trading route connecting Tibet and India. When the current Dalai Lama escaped Tibet and entered India in 1959, this is the route his entourage took. As it is now a border area, there is a lot of military presence and you need special permission from the DC office in Tawang.

Sangestar is a delightful high altitude lake en route to Bum La. Apparently it was created by falling rocks and trees from the higher mountains during an earthquake. It is nowadays called Madhuri Lake after the Bollywood star Madhuri Dixit who shot a song sequence here fro a film in the 90s.

Zeminthang is located in the extreme west of Tawang district, around 70 KMs from Tawang, close to Bhutan border. Basically, it is the last place you can reach on the frontier. The most notable structure near Zemithang is the Gorsam Chorten, a medieval stupa. Lots of exotic and offbeat explorations are possible here.

Gorichen is the primary peaks in this region and there is a strenuous trekking route to Gorichen Base Camp. There are many other smaller trails around Twang although they still remain relatively unexplored.

How to Reach Tawang? 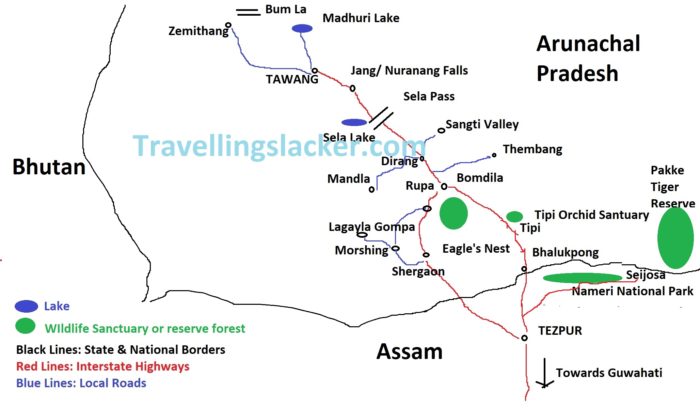 The primary route followed for this circuit is Guwahati-Tezpur-Bhalukpong-Tipi-Bomdila-Dirang-Tawang. However, there is another route that from Guwahati-Tezpur-Shergaon- Rupa – Bomdila-Dirang-Tawang.  As you can see in the Map above, the difference is between Tezpur and Bomdila, while the rest of the rote is same. Both routes have various attractions and it is suggested that you take one route while going and one for coming out so that you can enjoy both.

Normally you can take a flight to Guwahati and then look for cabs or buses going towards Arunachal.
There is also an airport at Tezpur so you can directly start at Tezpur. There is a helicopter service between Guwahati and Tawang too but it can always get affected by treacherous weather in those mountains and also the road trip has its own charm.

There is no train service on the Bomdila-Tawang route in Arunachal. The best you can do is to get a train from Guwahati or Kamakhya Station to Dekargaon (near Tezpur) and then look for local transport going into the hills.

By Bus or Shared Car

Guwahati to Tawang is 445 KMs and generally, people do not cover it in one go and halt at either Bomdila or Dirang, as it is a very long and tedious journey that also involves crossing the 4100 meters high Sela Pass. If you are reliant on public transport, you can look for morning buses from ISBT Guwahati. It leaves at around 7 AM and reaches Bomdila by the evening. Next morning, you can find Tawang Bus from Bomdila. Guwahati to Bomdila bus costs around INR 500-550 and Bomdila to Tawang will cost around INR 350-400.

If you are already in Tezpur, you can look for shared cars (Sumos) going upwards in the morning. You can stop directly to Tawang to stop at Bomdila.

If you have your own vehicle, still you will have to halt one night around Bomdila as it will be a very tedious journey. Also, be careful about crossing the Sela Pass on the second day. As it happens with high passes, you are never sure when it snows or when the weather deteriorates.

Where to Stay in Tawang?

As a highly developed tourist area, Tawang has dozens of hotels, resorts, and homestays at various price points. For the best experience, look for a good homestay run by a local family, so that you can get an authentic Monpa experience.

At Dirang and Bomdila also there are many options available. I stayed in Dirang at Dirang Boutique Cottages in the outskirts of the town.
Places like Bhalukpong has many hotels while and Shergaon has a couple of homestays.

Personally, I feel the spring & early summer (March-May), as well as post-monsoon months (September-October), are the best time to visit the Tawang circuit. I visited in January, the peak of winter. You may like it if you have some fascination for snowfall but, to be honest, I prefer warmer weather when visibility is better and easier to roam around.

Mobile and Internet Connectivity in Tawang

Mobile and data connectivity was reasonably good all along the Tawang-Bomdila circuit on my Airtel connection. There is no problem at all in lower areas such as Bomdila & Dirang. Once you cross the Se La, I expected it to be weak in Tawang but it was still working. Tawang has electricity issues and so there are occasional power cuts and the network also goes down during those times but it works when the power is there.

Can you suggest someone to plan a trip for Mon?

Visiting Mon on your own is possible but can be difficult. If you need help, you can always contact someone like HolidayScout who can arrange everything for you.

One thought on “Tawang Travel Guide”

Search
Support us on FB
ABOUT

Periplus Northeast (Periplus NE) is an attempt to provide genuine and comprehensive information about North East India. It intends to be the most comprehensive Northeast India Blog for backpackers and other travellers.

Periplus NE is open for all sorts of collaborations. There are different options for travel writers, local entrepreneurs, and established businesses.