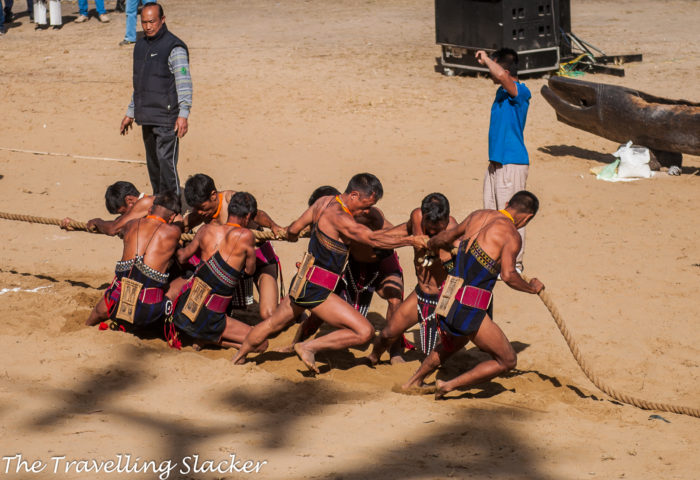 Nagaland is one of the remotest states of India and understandably not a very easy one to explore. Only the area around Kohima is easy to reach and can be easily explored as the area has good infrastructure. Rest of the state is still remote. Very few people have been to districts like Tuensang and Kiphire. The road conditions also make it hard to drive around. Especially the rainy season should be avoided in case you are planning to visit the remote regions.

Various Naga Tribes inhabit different districts of the state. Kohima is an Angami area while the Ao Nagas live in Mokokchung and the famous Konyaks can be found in the remote district of Mon, which borders Myanmar. You can get a glimpse of their respective cultures at the Hornbill festival but if you really want to experience their authentic lifestyle, you will have to reach their respective locations.

Another thing you should be noted in Nagaland is the food. Naga cuisines are becoming popular and Naga restaurants are now getting opened in other cities of India such as Delhi. However, in case you are a Vegan or something similar, it can be a hard place to travel around. You will find all the options in Kohima, but beyond that, you must make prior enquiries and arrangements if possible.

This Hornbill Festival for Vegans guide may be useful in this regard.

How to Reach Nagaland

You have to first reach Dimapur, which is well connected with Guwahati via overnight buses. From there you can get buses and shared cars to Kohima, from where you can get other transports to inner areas. If you want to reach Mon, it is better to go via Sivasagar district of Assam.

Dimapur is the only major train station here. It is located on the Guwahati-Dibrugarh route. Even the Rajdhani Express connecting Delhi to Dibrugarh stops here. From here you can get buses and cabs to Kohima.

There only major airport here is at Dimapur (DMU), connected directly to Kolkata.

Indian visitors need an Inner Line Permit (ILP) for Nagaland. However, the foreigners no longer need any permits anymore. This move has been made in order to attract more foreign tourists. These permits can be acquired at various offices located at the major cities of the country. The applicants need to produce valid IDs and photographs for the purpose. If you are going through a tour operator, they can generally help you out with the same. Recently, the online ILP system has also been introduced only for Indian tourists.

Read this detailed guide for getting Inner Line Permits to Nagaland.

What is the best season for visiting Nagaland?

While Nagaland can be visited throughout the season, the rainy season between April and September is best avoided except Dzukou Valley. The rains are generally incessant in this season and the road conditions get affected as a result. However, the Dzukou Valley blooms with wildflowers in this season and is the only reason to try your luck in the rains. Otherwise the popular season is the winter, between November to February. The Hornbill Festival takes place in December and that can be the best time. Also, in case you want to see the Amur Falcons in Wokha, you need to visit in October.

Bus service exists but limited within Nagaland. Most major towns are connected with Kohima through shared cars. Kohima and Dimpaur are big cities and have many hotels and other facilities. Homestay can be found in small villages near Kohima while there is a tourist lodge atop Dzukou Valley too. Other towns are still developing in this regard and most of them don’t have more than 2-3 basic hotels or homestays.

Top Things to See and Do in Nagaland

Dzukou Valley: A Hike to the Garden of Eden

It is hard to express Dzukou Valley in words. You might have done other treks, you might have seen high altitude meadows and rolling hills, but most probably you have not seen anything like Dzukou. One way to explain it probably describes it as a cluster of many miniature plateaus in one place. In any case, must visit the place to know what it exactly is. Dzukou Valley trek is the easiest yet one of the finest and most unique treks in entire Northeast India. The trekking point is barely 20 KMs from the capital city of Kohima and so it also remains one of the most accessible ones. A short steep but short hike takes you to the 2500 meter high valley. Dzukou remains accessible throughout the year but in the summers the lush green valley gets covered by multicoloured wild-blossoms. One of the rarest endemic flowers here is called the “Dzukou Lily” that blooms only for a couple of weeks.

Mon: The Land of Tattoed Headhunters

The Konyaks of Nagaland were fierce warriors and they did collect the severed heads of their enemies in the past. It is not much different from the rest of us, everyone had to fight for survival in the olden days. It is just that they preserved those skulls as trophies, and became famous as headhunters. Konyaks have very strong and athletic build and they can be distinguished by their tatooes and piercings. The Mon district of Nagaland is the primary habitat of the Konyaks and they were the last ones in the region to adapt western practices. It is one of the remotest regions in the country and their rugged lifestyle is believed to have made them strong and given them logivity. This is why their lifestyle and culture are nowadays attracting a lot of people from all over the world.

Wokha: A Date with Amur Falcons

Wokha district was barely known to the rest of the world but a few years ago it suddenly hit international headlines due to the amazing conservational success story of the Amur Falcons and that is why this is one of the areas worth visiting in the state, but in the right season. Pangti is the largest village in the Doyang Valley and the primary spot for the Amur Falcons a couple of hours drive from Wokha town. These birds arrive here in large numbers from the colder climates of Siberia and Mongolia as they try to escape the harsh winter. Initially they were being hunted down and their conservation became an issue. However, in the last 5-6 years, a very successful community outreach program has managed to stop the hunting. Wildlife and bird lovers now visit this village in season and have turned it into a tourist spot.

Hornbill: The Festival of Festivals

The Hornbill Festival is an annual, week-long cultural extravaganza held every year in the first week of December in Nagaland. It is named after the Great Indian Hornbill bird abundant in the region. Of all the tourism festivals organized all over Northeast India, this remains the largest, most popular and most successful. Fondly known as the “Festival of festivals”, this takes place at the Naga Heritage Village at Kisama, just 10 KMs from Kohima, where one can enjoy the Naga lifestyle and culture, food, music and tradition of each of those Naga clans, all at the at same place. Besides the usual showcasing of Naga dance, music, art, ethnic foods, handlooms and handicrafts, many other interesting contests and fun activities are organized such as king chilly eating contest, pork fat eating contest, martial art contest, hornbill rock festival, beauty contest etc.

Most people are not aware of this part of the World War II. The great war was fought here too, on the Northeastern front, as the Japanese army, as well as the Indian National Army under Subhash Bose tried to enter British Army. The heaviest battle took place in Nagaland and Manipur. The war cemetary in the heart of Kohima is a poignant reminder of those who perished here. The cemetery has around 1500 graves maintained by the CWGC and there is also a cremation memorial for Hindu and Sikh soldiers. A couple of Lee Grant Tanks that took part in the action can be seen nearby. The other major site is the WW II Museum at Kisama (also the venue of Hornbill Festival). This had to be built because various remains of the battle such as parts of destroyed tanks, grenades, bullets, guns, letters, and other objects, as well as documents, keep getting dug out from this area. Also, there are some caves around the sleepy town of Pfutsero, around 60 KMs from Kohima, where the Japanese soldiers camped.

Phone and Data Connectivity in Nagaland